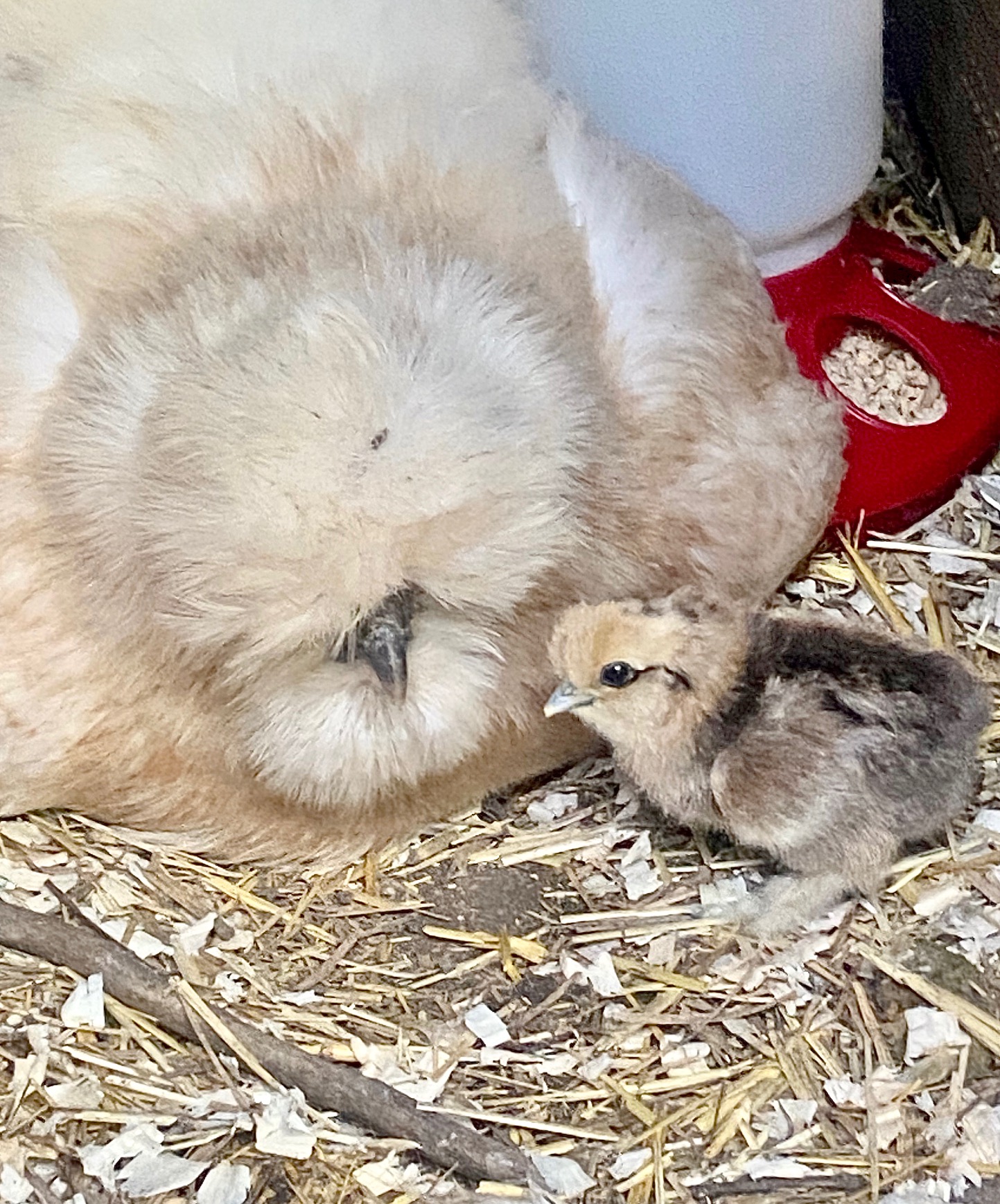 I was holding the egg between thumb and forefinger, pondering.
“Do you carry life?
Will I get to know you as a chicken?”

I lifted it up before my squinting eyes; the three of us – sun, egg and me – we became aligned for one moment, in a configuration of light, veins and wonder.

“Yes”, I thought, “I hope you do, I hope I will”, and with that I kissed the Fates and placed the egg back in the nest box with the mama hen.

It’s the penultimate Saturday of spring, according to the calendar. I wake up slightly irritated from a busy dream, the kind that demands much from the dreamer. As usual, I head first for the kitchen nook, where my love usually sits on his computer in the mornings. He isn’t there though his car is in the driveway, so I slip some shoes on and step outside. I head for the chicken coop. Today is the 21st day of incubation.

Sure enough, there he is. He is bent over, his head stuck in the coop through the little door that opens up to the nest boxes.

I open the coop door and go inside – there is the empty shell and the mama hen sitting, not inside, but on the edge of the box. I don’t want to get too close lest I disturb her so I watch and wait. After a few moments it pops up, a little fluffy head with a wide-open eye and a tiny beak, so perfectly formed in its minuteness. I can hardly believe it.

“What’s more important that you?”, I ask, but all I can hear is a high-pitched peeping.

“What’s more important than you?”, and later at the table over coffee we both agree, and I feel happy that our hearts are still soft against the hardened backdrop that we call our modern life.

I’ve learnt to share this joy, even when others don’t understand it, can’t feel it. I was once that way, despite my animal-loving inclinations and my sensitivity, a heart scarred shut by trauma and fear. I’ve learnt it’s best to share the invigorating innocence when it has me in its soft embrace, because it grows in the sharing, despite the reception it receives. Well, something receives it anyway, beneath the layers of cynicism and defensiveness; the heart recognizes the heart, and love’s sweet bells strike a chord of harmony that swells to infinity.

So I called my father and told him about the chick. I described it in detail, recounted how it is already learning how to drink water and eat little grains of feed from the little red containers, how mama hen talks to it constantly and it talks to her, how different sounds mean different things, how it runs and hides under her wings, a little head of yellow and black framed by a fluffy sea of downy white. I told him how I look at its big eyes peering, singularly and independently, up at a fresh and massive world beyond, and down at a patch of ground with promises of worms and beetles.

“These are beautiful things”, my father proclaimed, and I knew I had succeeded in what I often failed to do, to lighten his mood, to lift the clouds of experience, to disrupt my familial neuronal inheritance of somberness, and to open up space for something else. For what? A rare connection perhaps. A little dream. Mutual learning.

Throughout the years I have seriously wondered why environmental education has failed. I mean, it has failed, right? Perhaps children are more aware of the issues, but are they empowered, are they inspired? Do they hold a version of reality worth preserving, do they carry a notion of beauty into their future? I don’t know, I sincerely hope they do. Is the world any safer for them, for nature and its people than it was a few decades ago? The journals and the newspapers say the sixth mass extinction is well underway, and humanity might be going that way too, sooner than later.

And the anxiety, the suicides, the opioids, the sadness, they are on the increase too. What a mess, really, what a world. Some days I wonder at the animal who took a cathedral of trees and rivers and birds, and turned it into strip malls and roads full of traffic lights and frustrated people scrolling images of other animals’ lives on little screens and drinking sugar from a polystyrene cup. With its large brain this animal saw a seamless world and over a few millennia managed to twist it into a knotty tangled web in which it trapped itself. Not all humanity, some people will say, to which I respond that most of the history we all learned in school was the history written by those most powerful and dominating, who ultimately got their way. These are the ones still weaving the web we find ourselves in and now we weave it too around our own legs and arms and torsos. But those of us who were lucky remember our grandmother’s songs she sang while rocking us on her lap. I will admit, it was those songs I sang in my head as I boarded to leave my own country for the United States. You see, while the sticky web is currently global, the songs in our hearts, if we carry some, will meet us right where we are without shame and guilt, without blame and exclusion, to break us loose from the spell that would keep us feeling unworthy, inert and uncompassionate.

It is unfathomable that there could be anything more important right now than watching a chick hatch and grow. Absolutely unfathomable. How to defend this to those who will rightly tell me of my privilege, of my role in society, of survival, of inequality, of the economy, of household duties, of climate change, of responsibility, of ‘real’ work and action? Dear friend, the truth is I cannot defend it, neither market it nor sell it. I can only share how it makes me feel, freely and earnestly. And I fear that it is for this reason that the true meaning of the egg that turned into chick will remain mostly concealed, and the world will never know its miraculous, healing power. But I do it anyway, and with a hope I kiss the Fates and wait to hear the peeps from all the hatching hearts across my world.

All text and photographs © Lilia Kapsali, 2022