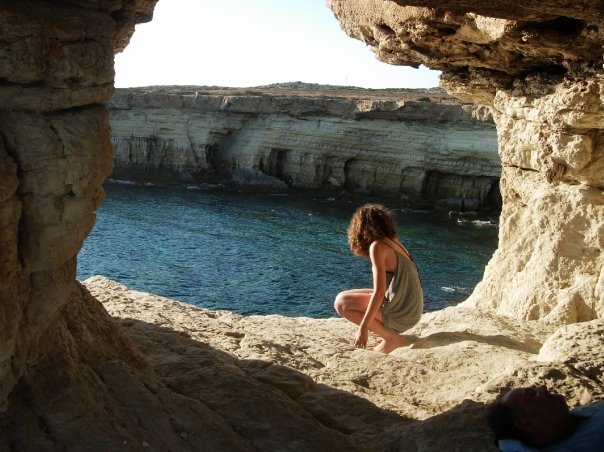 [From the forthcoming booklet Rooted in Soil, Shifting Waters: Writing the Sea that Holds a Thousand Colors, a collaboration with winter’s bloom, available for pre-order here: https://venusdelouisiane.com/…/rooted-in-soil-shifting…/]

It is difficult to explain the relationship I have with my home country; it is ambiguous. There are so many forces push-pulling me away-close. It is like a relationship with an abusive parent one needs, but who gives mixed signals about ‘love’.

If I look at Cyprus with the shallow make-believe eyes of a tourist, which seldom penetrate this thin milk-skin of sunlight and good times, Cyprus is a paradise on earth, an island blessed with mild climate, good food and kind people. But if I don’t squint and hold my breath, it cuts me. Forces of history, power and domination are woven through the matrix of its earth, bowels embroidered with minefields, mass graves and carved hillsides. Human and natural contexts were long ago laced in a complicity of copper. Strategic (im)positions mixed Commandaria wine with blood; all that is left from our identity are empty towers, eroded coastlines, and a Leviathan that’s devoured our soul in return for a few trillion cubic feet of natural gas (we are capitalists).

The poets have asked before, how can one be whole in a society thriving on partitions?

Researchers are finally recognising that certain mental disorders might be systemic, complex and multi-level issues, related to trauma, adversity and socio-cultural factors (the mind-body split, they are questioning it).

The eggs of fascism that have hatched into the present-day snakes of the far-right ELAM party had been incubated for decades by all sectors of society, and assisted by the Ministry of Education and the Greek Orthodox Church. These are the institutions that will clutch their pearls at the accusation (who us?) and say that they have always looked out for the good of the people (the Right Way, the only God, our Nation).

Yes, it is possible that mental disorders are responses to the environment.

What is the appropriate response to having your country physically divided into two, and being taught to hate people who look like you, sing like you, cry like you, and cook the same taro recipe as you?

It’s true we saw the giant flag on the mountain every day from our windows with our own eyes, reminding us that Turkey was watching our every move. They lied to our people on the other side, they told the children we (on this side) were murderous monsters. Meanwhile, we all (on both sides) cried, sang, ate our grandmothers’ taro stew and walked to school with a knapsack heavy with half-truths.

Who murdered the cats, dogs, songbirds and sea turtles?

Everywhere you walk in Cyprus you trip on discarded sofas, spent bullet casings, glue-traps, pieces of poisoned meat and human bones. Put that on your postcard.

Like taro roots the unnamed dead lay buried in the earth piled on top of one another. They are being slowly unearthed by a special committee of expert archaeologists, geneticists, historians. Slain men, women and children, kidnapped, tortured and murdered for having a ‘different’ identity, for having beliefs that someone did not agree with. Their skulls and pelvic bones reflect the light under a scorching Mediterranean sun. The Mesaoria plain is deathly silent; not a leaf stirs for these souls across the island.

Not a leaf stirs for the abused domestic workers, the trafficked people, the missing people, the women that have been murdered by psychopaths and thrown into landfills, mine shafts and toxic lakes, the immigrants that are held in crowded and unsanitary conditions, and the ones who work in construction or agriculture for slave wages, because they are Philippino, Nepalese, Romanian, Pakistani, Syrian, Egyptian, Palestinian, Cameroonian, Bangladeshi and Indian.

This is how we treat all those who are different from us (unless they have lots of money, maybe).

Growing up I saw cranes and bee-eaters flying over the island, I wished for wings with feathers, so I could fly away too. But don’t make me a songbird, God, they catch those and sell them in the black market. Make me a migratory raptor, like a proud Honey Buzzard. Do those make it out alive? You called us traitors anyway, my mother, my brother, my friends, for working for peace and the protection of nature. In another time, we might have ended up in your freshly-dug pit with a hole in the head. Maybe taro would grow from my eye sockets.

Do I exaggerate? I felt relief when I left Cyprus.

The first time I saw a rifle bullet I couldn’t wrap my mind around it, it was shiny and smooth and felt so hard against the softness of my 9-year-old palm. Because my father was a Reserve, because we lived by the Green Line, because our country was occupied by a foreign army, disassembled rifle parts slept scattered and hidden around the house (our house), like orphan children.

In primary school I had to sing the Greek national anthem (My passport says “Nationality: Cypriot”). When I said “je” my teacher corrected it to “ke”, because we had to speak Modern Greek (Cypriot is ‘horkatika’, ‘the language of peasantry’). I learned to see Cyprus through the lens of Greek history, and I adored the Greek writers and poets and heroes. And at home, Nasreddin Hoja sat next to Aesop on the bookshelf, and Scheherazade, Sinbad, Alladin and Ali Baba had conversations with Jesus, Barbie, Bugs Bunny and Hercules. When the teacher in a multiple-choice test asked what we called people who don’t speak Greek, I couldn’t bring myself to circle the correct answer (barbarians). Meanwhile outside the window the Imam called the faithful to prayer…

We also learned how terrible the British colonisers were, they showed us the picture of Gregoris burned to a crisp for fighting to rid us of the British yoke (charcoal and teeth). They kept Ottoman law, they turned Turkish Cypriots against Greek Cypriots, they hanged young men who fought for what they thought was freedom. Cypriot men fought alongside British men in the Second World War, the men of the colonies fought. (My grandparents’ old ID cards say: “British subject”). My school would take us to see the noose- my father would always take guests interested in our history to see the noose which killed Evagoras who was nineteen years old. Evagoras’ mother had written to young Queen Elizabeth II asking her to pardon him (“please he is nineteen you are also a mother”).

Then later I went to a private secondary school which was founded by the British in 1900, and we had houses like Hogwarts and I was in Kitchener house and we were proud when Kitchener won in sports but 1st Earl Kitchener was a fierce colonial officer who bullied his own soldiers and placed Boer women and children in concentration camps to die, after burning their farms (I didn’t know this back then, they never told us). I loved English literature and wanted to live in the UK. I have family in the UK. I admired Charles Darwin and Alfred Russell Wallace so I studied Biology in Edinburgh, the ‘seat of Enlightenment’. We dissected all manner of things and labeled their innards (we were scientists). When I went back for my Master’s degree, a professor marking my essay, wrote: “your English is very good”.

It was called “The Line of Confrontation”, that thin sliver of land where Greek Cypriots and Turkish Cypriots met in 1996 to defend the dividing line in their minds. Tassos Isaac was beaten to death by the Turkish far-right nationalists live on TV and later Solomos Solomou climbed on a mast to take down a flag and was shot in the neck by the Turkish sniper again and again on the evening news. Less than a decade later my year in high school was the first to be integrated since 1974, and my class had two Turkish Cypriots. They had a hard time. The school didn’t really help us know how to be together. The year before we graduated a group of ultranationalists entered our school and attacked our Turkish Cypriot classmates. The press kept writing articles about us, the parents-teachers association was divided, politicians spoke their usual lines. The Government didn’t help us know how to be together. We had a hard time. The English headmaster called us ‘Losers’ in our graduation book, for acts of vandalism and defiance by people in my year (I think he was wrong).

What I write here are not memories I had to dig up, they were occurrences of everyone’s life, as normal as the first rains of autumn and building sandcastles on the beach in the summer with little sandwiches and watermelon in a portable cooler under a flapping umbrella.

I think if Cypriots read this they might say I’m too much, I’m too comfortable abroad and far away, I’m ‘Anglo-Educated’ and a heathen. I say maybe they’re right, maybe the distance is helping me see, maybe they can’t see how jarring and fucked up it is without looking at it with a certain detachment.

Maybe it’s not unreasonable to be diagnosed with anxiety or depression or borderline personality, given the socio-politico-historical context in which we grew up. Maybe the sensitive ones buckle under the weight of history, maybe they fly away into oblivion. Maybe instead of buzzards we are canaries in the coal mine, the new diaspora of the highly sensitive and societally afflicted, the underestimated and overlooked.  Survivors of the paradoxes and double-binds of history and culture, we learn to walk the tightrope of irrelevance, loneliness and freedom here in foreign lands. If being Cypriot is a kind of trauma, and a confusion, I’d rather be a fleeting, feathered shadow on the wall.

If you enjoy my writing and/or the Nature Connection events I offer free of charge in Baton Rouge, you can buy me a coffee using the link below. Thank you, your support means the world to me :)

All text and photographs © Lilia Kapsali, 2020